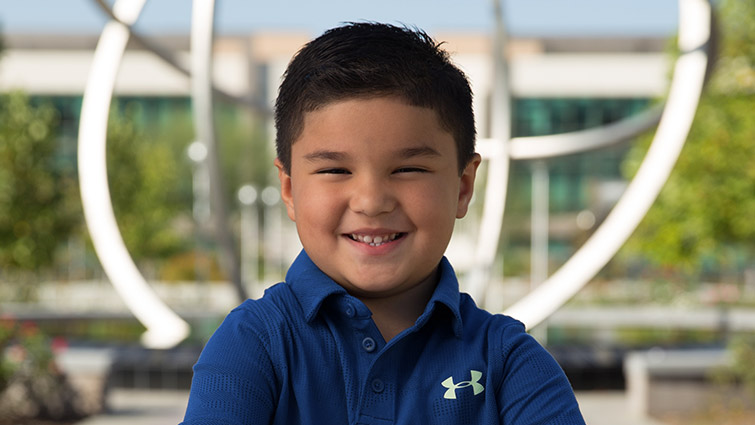 When their son was born, Ricardo Presichi and his wife found themselves in the situation every parent fears. Below, Mr. Presichi shares his experience at Loma Linda University Children's Hospital.

Advent is a time for waiting — my wife and I know the feeling all too well. We waited for 14 long years for God to give us a child. And just when we thought it would never happen, my wife became pregnant with our son.

On the day our son was born, we left the house as excited new parents. I remember saying, “When we come back to our home, there will be three of us!”

But when we arrived at the hospital, it became clear that something was terribly wrong. The ultrasound showed meconium in the amniotic fluid — our son was in distress. When he was delivered, his lungs collapsed immediately.

Doctors and nurses placed him on a cooling bed and prepped him to be airlifted to Loma Linda University Children’s Hospital. My wife hadn’t seen him, hadn’t even touched his tiny hand. We weren’t sure if she would ever see him alive. But, in faith, we named him Emmanuel — God with us.

I went with the team to the Children’s Hospital. The doctors explained Emmanuel had only a 50% chance of survival, and they promised to do everything they could. As Emmanuel was fighting for his life, my heart broke. With all the machines keeping him alive, my baby, the baby I’d seen delivered, just wasn’t there.

But Emmanuel was still alive. And together we fought through that first day.

The next days were a blur. We experienced setback after setback with a cascade of new issues everyday. And yet I had confidence that the team at LLU Children’s Hospital was the best possible one for Emmanuel. They were well trained. They were deeply committed to saving our son. And they worked tirelessly to do so.

On the day my wife was released from the hospital, I tried to prepare her for what she was going to see. I said, “Be ready. Just keep your eyes on Emmanuel and focus on him.” Nonetheless, it was heart wrenching to see him sedated and so vulnerable — and to be unable to touch him, to hold him. This was supposed to be a joyful moment: mother and son reunited. Instead, it was filled with sadness.

Despite the waves of grief, we decided not to cry at the NICU. We were strong for Emmanuel. But in the car on the way home we wept bitterly and cried out to God, asking him to keep Emmanuel alive another day.

For weeks, we lived just one day at a time. The team did everything they could humanly do. Still, there were challenges. At one point, Emmanuel had a brain bleed, and we thought we were losing him. But they saved him yet again.

As Mother’s Day approached, we received devastating news: my wife’s father had passed away. We faced a hard decision. Should we go to Mexico to bury her father and leave Emmanuel alone at the hospital? But one of the nurses came to us and said, “I’m taking Emmanuel under my wing until you get back.” We were blown away. She understood exactly what we needed in our time of grief.

Those doctors and nurses were angels in disguise. They gave their all to save Emmanuel. Every single person we met on the LLU Children’s Hospital team fought heart and soul to save his life.

And finally — miraculously — we were able to bring Emmanuel home.

You can help kids like Emmanuel make it home.

Loma Linda University Children’s Hospital saved my son’s life – and they cared for our whole family. It is a place for miracles.

Today Emmanuel is a happy, healthy little boy. He loves kindergarten and lights up every room he’s in. He is perfect and whole.

Last Christmas he proudly led the pageant as an angel, carrying a star and declaring, “Do not be afraid, for I bring you good news!” This Advent season my family will remember again what it is to wait with expectation, and to trust God in the darkest moments of fear, desperately searching for good news.

If it weren’t for the remarkable team at Loma Linda University Children’s Hospital, Emmanuel’s story may have ended differently. We will be forever grateful.

Your support of Loma Linda University Children’s Hospital saves lives and gives families hope in the darkness. This Advent season, please join my family in our appreciation for this amazing hospital by making a gift today.

From the bottom of my heart, thank you for your support, and have a blessed holiday season.

Your gifts can help kids like Emmanuel make it home.

Join Loma Linda University Health in the fight to save lives as we address this rapidly changing crisis in our region.

Help Us Make an Impact

Whether you’ve given or received support, your story has the power to move and inspire. You never know the impact you’ll make by sharing it.