Every provider at Loma Linda University Health can tell you how important it is to keep your lungs healthy. Our lung specialists, like Dr. Laren Tan, see patients every day who suffer from debilitating lung issues caused by smoking. Dr. Tan has started to see similar issues in patients who vape.

As smoking has declined dramatically in the U.S., vaping has gained tremendous popularity very quickly. This is especially true among teens. A 2018 study reported 20% of high schoolers vaped at least once in the past 30 days. About the same amount of boys and girls vape.

Keep reading to learn more about vaping and how it’s affecting young people.

“I am officially declaring e-cigarette use among youth an epidemic… I do not use that word lightly.”

6 Keys to Understanding the Vaping Epidemic

The term “vaping” comes from the act of inhaling and exhaling e-cigarette vapor (which is actually an aerosol). E-cigarettes heat up liquid from replaceable cartridges, producing the vapor. Just like a smoker does, an e-cigarette user inhales the vapor through the device, then exhales.

The most important thing to understand is that the liquid in e-cigarette cartridges is not regulated by the FDA. Because of this, we don’t know what’s being inhaled.

What we do know is that many cartridges contain nicotine, the dangerously addictive chemical found in normal cigarettes. Nicotine is derived from tobacco and produced synthetically.

Even if a cartridge doesn’t contain nicotine, other harmful chemicals may be present.

E-cigarettes can also be used to vape marijuana’s psychoactive ingredient, THC. Perhaps contrary to what many would expect, vaping marijuana may have as many negative health effects as nicotine-based vaping. This may have more to do with how vape liquids are processed than the THC itself.

3. Vaping affects lung health — we don’t know how much yet

While vaping does produce fewer chemicals than smoking, that doesn’t mean it’s safe.

Because vaping has only recently gained popularity, we don’t yet have the data to tell us all its health effects. This is especially true of long-term effects.

However, harmful short-term effects have already been observed. Vaping has already been associated with coughing, difficulty breathing, fever, nausea and vomiting. These symptoms may be an indication of vaping-related lung illness. Recently, as many as 1080 people have been identified as developing illnesses after vaping. According to the CDC, 18 of those people have died.

While it isn’t clear exactly how vaping is causing illness, it’s clear that people should avoid starting and quit immediately. People under 25 should especially reconsider vaping, as there may be more serious effects on their developing lungs.

The brain is also in development until a person’s mid-20s. During this time, the brain is constantly rewiring itself, which makes it far more vulnerable to nicotine addiction. This is part of why teens who vape are nearly three times more likely to begin smoking cigarettes.

Exposure to nicotine can also rewire a young brain to become more easily addicted to other substances, including cocaine and alcohol.

Outside of addiction, nicotine can also have other long-term and permanent effects on developing brains. These include mood disorders and reduced impulse control.

5. Teens are being targeted and they don’t understand the risks

Teens are surrounded by reasons to try vaping. These can include:

Over 50% of middle school and high school students reported seeing e-cigarette advertising. Only 28% of young people in the U.S. believe e-cigarettes have the potential to cause a lot of harm. Up to 40% of teens who vape are unaware their e-cigarette cartridges contain nicotine.

Nonjudgmental, non-confrontational discussion can help young people understand the risks associated with vaping. Let them know that their health is more important to you than anything else. Talk about the research showing a number of short-term and long-term risks to their lungs and brain.

Even if you’re a tobacco user, having an open, honest discussion with your teen can help. Tell them how tobacco has negatively affected your life. Talk about how hard it’s been to quit.

Teens today have access to more potentially misleading information than at any other time in history. They’re also bombarded by more sources of advertising than ever before. Helping a teen understand what sources to trust can give them a powerful tool to educate themselves.

Dr. Tan provides care to adults alongside an entire team of lung specialists at Loma Linda University Health. Our experts provide care to both kids and adults with complex lung issues from all over Southern California and beyond.

Our compassionate providers can help both you and your child understand the dangers of vaping and provide resources that help people quit using tobacco products like e-cigarettes.

If you want to talk to a doctor about vaping, make an appointment with our lung specialists or your child’s pediatrician today. 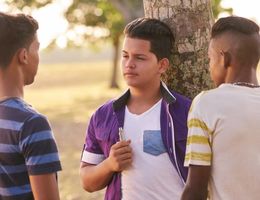 Vaping May Cause Long-Term Damage

E-cigarettes may cause serious, long-term health problems for people of all ages. Dr. Tan, pulmonologist, details what we know right now.
Read Article 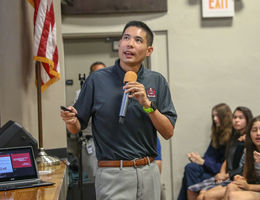 Dr. Tan is one of many doctors concerned about the health risks of vaping. He's touring schools in the region to reach teens, who may be more vulnerable to damage caused by vaping.
Read Article
woman looking at laptop

Take Charge of Your Health

Find the tools you need to manage your care, request medical records and pay bills.