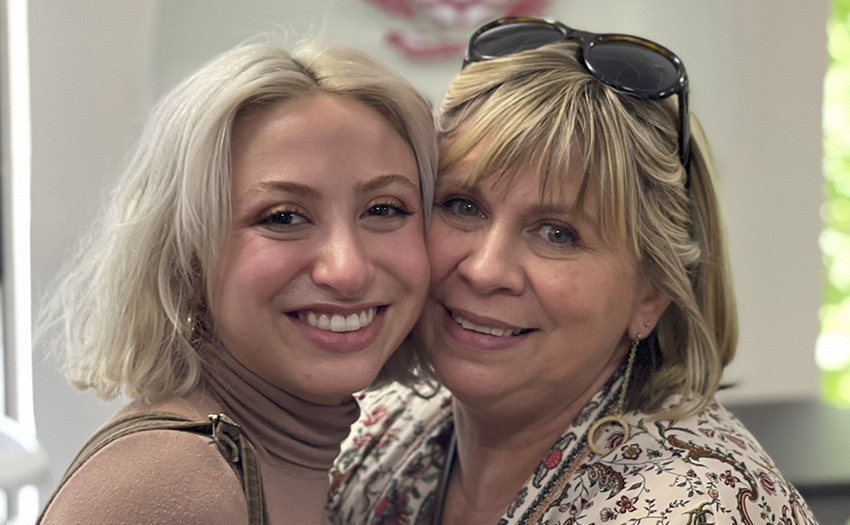 When Katrina Bianchi joined her Hello Forever bandmates on a flight to Europe on November 22, 2021, Bianchi knew she was living what she considered a miracle. It wasn't just that they were on their way to launching a nine-stop concert tour. For her, it was the fact that she was even able to go — considering that two months earlier, she lived with excruciating pain and couldn't walk.

Bianchi broke her leg in July 2021 while roller skating and “throwing tricks” at a skate park. As part of the surgery to repair fractures in her leg, the surgeon and anesthesiologist recommended Bianchi have a temporary nerve block for post-surgery pain.

“They told me there is less than a 1% chance of nerve damage with a nerve block and I was the perfect candidate,” Bianchi says. But as the nerve block wore off after surgery, Bianchi began to feel pain. And it wasn't from the rod and screws used to repair her leg.

“My foot was numb, but I could feel sharp pains, like electrocution,” Bianchi says. “It was nerve damage pain — the worst pain I've ever felt.”

Over the next two months, Bianchi became wheelchair-bound. Her left leg was numb, but the pain was a relentless, “horrible electric sensation.” Multiple trips to the emergency room and repeated calls to her doctor were no help.

In September, the toes on her left foot began clawing – turning inward. Testing revealed Bianchi did have nerve damage, known as neuropathy. Two of the nerves in her leg weren't responding to electrical stimulation. Specialists believed the nerve block was to blame but gave Bianchi no solutions.

Bianchi was desperate for solutions. The 24-year-old wanted to be back to living on her own with her bandmates, not with her parents. Bianchi and her mom spent hours online, looking for answers. Their late-night searches eventually led them to the Neuropathic Therapy Center on the Loma Linda University Health website. Bianchi scheduled an assessment.

That's when she learned about Intraneural Facilitation (INF), an innovative physical therapy treatment used at the center to reduce nerve pain by improving blood flow. The breakthrough therapy involves using bands and alternating pressure to different areas of the body to increase circulation, which helps nerves heal.

During Bianchi's first therapy, she alternated therapeutic holds and stretches while physical therapist Mark Bussell, PT, BS, OCS, worked with her foot. “I started to feel sensation in my foot that first session,” Bianchi says. “The pain started to subside after a couple of treatments, and I could walk some.”

Bianchi began using a crutch, and by the third session, she walked without it. “I had no limp ... It felt so normal,” Bianchi says. “It was really exciting!”

But Bianchi learned that nerve damage takes time to heal. “Some days are better than others. Some days I can walk around the house, others I can't,” Bianchi says.

She also learned that food, specifically gluten, dairy, and sugar, can increase neuropathy pain. She underwent testing that monitored how much inflammation from those foods restricts blood flow. “I accidentally had dairy one day, which put me in a world of hurt,” Bianchi says.

Bianchi uses treatments similar to what therapists use in the office when she has flare-ups at home, which help calm down the pain. With therapy two or three times a week, she's off all pain medications.

Bianchi's grateful how the therapists are helping her get back her independence – she's back to work, and can cook, drive and shower on her own. “I'm starting to re-enter society. I'm able to go on tour because I found this therapy and team.”

But she's quick to add her gratitude goes beyond the therapy that's given her hope again. “It's their personal care and interest for everyone who comes in,” Bianchi says. “They're so invested in my journey and making sure I get better. That's rare today. They've given me my quality of life back.”

Take the Next Step

If you’re suffering from nerve pain, our Neuropathic Therapy Center may be able to help using a breakthrough physical therapy treatment called Intraneural Facilitation or INF.™ For more information and to schedule an evaluation, call 909-558-6799 or request information online.

Learn what to expect and how to prepare for your first appointment.

Take Charge of Your Health

Find the tools you need to manage your care, request medical records and pay bills.