Cancer is when cells in the body change and grow out of control. Your body is made up of tiny building blocks called cells. Normal cells grow when your body needs them and die when your body does not need them any longer.

Cancer is made up of abnormal cells that grow even though your body doesn't need them. In most cancers, the abnormal cells grow to form a lump or mass called a tumor. If cancer cells are in the body long enough, they can grow into (invade) nearby areas. They can even spread to other parts of the body (metastasis).

What is lung cancer?

Lung cancer is cancer that starts in the cells that make up the lungs. Many other types of cancer, such as breast or kidney, can spread (metastasize) to the lungs. When this happens, the cancer is not called lung cancer. This is because cancer is named for—and treatment is based on—the site of the original tumor. For example, if breast cancer spreads to the lungs, it will be treated as metastatic breast cancer, not lung cancer.

The lungs are sponge-like organs in your chest. Their job is to bring oxygen into the body and to get rid of carbon dioxide. When you breathe air in, it goes into your lungs through your windpipe (trachea). The trachea divides into tubes called bronchi, which enter the lungs. These divide into smaller branches called bronchioles. At the end of the bronchioles are tiny air sacs called alveoli. The alveoli move oxygen from the air into your blood. They take carbon dioxide out of the blood. This leaves your body when you breathe out (exhale).

Your right lung is divided into 3 sections (lobes). Your left lung has 2 lobes.

What are the types of lung cancer?

About 85% to 90% of lung cancers are non-small cell. This cancer has 3 major types. They are grouped by the kind of lung cell the cancer started in and by how the cells look under a microscope. They have slight differences among them. But they tend to have a similar outlook (prognosis) and are generally treated the same way:

Lung cancer, like all cancers, can act differently in each person, depending on the kind of lung cancer it is and the stage it is in. But when lung cancer spreads outside the lungs, it often goes to the same places.

Talk with your healthcare provider

If you have questions about lung cancer, talk with your healthcare provider. They can help you understand more about this cancer.

When lung cancer caused a tumor on Dave’s spine, his surgeon used spinal tumor ablation with radiofrequency to remove it and restore his spine to health. 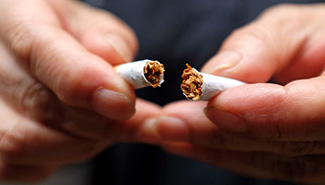 Lung cancer kills more people than any other cancer — but smoking isn’t the only cause. Learn why lung cancer screening may be right for you.