Anatomy of the hand

The hand is made up of many different bones, muscles, and ligaments that allow for a large amount of movement and dexterity. There are 3 major types of bones in the hand itself, including: 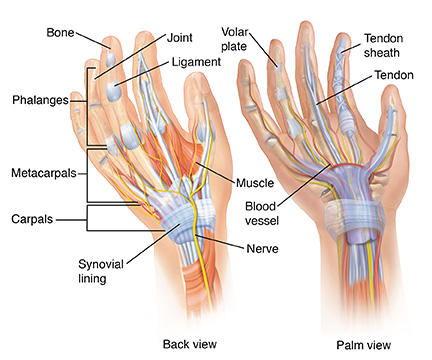 What are common hand problems?

There are many common hand problems that can interfere with activities of daily living. They include:

Arthritis is loss of joint cartilage, often with inflammation, pain and stiffness. It can occur in many areas of the hand and wrist. Arthritis of the hand can be very painful.

Osteoarthritis is one of the most common forms of arthritis in the hands. It may be caused by normal use of the hand. Or it may develop after an injury. Osteoarthritis often develops in one of 3 places: the base of the thumb, at the end joint closest to the fingertip, or at the middle joint of a finger.

Symptoms of osteoarthritis include:

With this condition, the median nerve is squeezed or compressed as it passes through the carpal tunnel in the wrist, a narrow, confined space. Since the median nerve provides sensory and motor functions to the thumb and 3 middle fingers, many symptoms may result. Each person’s symptoms may be different. Symptoms may include:

The symptoms of carpal tunnel syndrome may look like other conditions, such as tendonitis, bursitis, or rheumatoid arthritis. Always see your healthcare provider for a diagnosis.

Soft, fluid-filled cysts can develop on the front or back of the hand for no apparent reason. These are called ganglion cysts. They are the most common noncancer, soft-tissue tumor of the hand and wrist.

The most common symptoms for ganglion cysts include:

The symptoms of ganglion cysts may look like other health conditions or problems. Always see your healthcare provider for a diagnosis.

At first, when the cyst is small and painless, treatment is usually not needed. Only when the cyst begins to grow and hand function is affected is treatment usually necessary. Treatment may include:

Tendons are the tough cords of tissue that connect muscles to bones. Two major problems linked to tendons are tendonitis and tenosynovitis. Tendonitis is inflammation of a tendon. It can affect any tendon. But it's most often seen in the wrist and fingers. When the tendons become irritated, swelling, pain, and discomfort will occur.

Tenosynovitis is the inflammation of the lining of the tendon sheaths which enclose the tendons. The tendon sheath is often the site which becomes inflamed. But both the sheath and the tendon can become inflamed at the same time. The cause of tenosynovitis is often unknown. But usually strain, overuse, injury, or excessive exercise may be a factor. Tendonitis may also be linked to disease, such as diabetes or rheumatoid arthritis.

Treatment for most tendon problems may include:

Concerned about this condition? Our experts are here to help.