Leukemia starts in early (or immature) forms of blood cells. Most leukemias make abnormal white blood cells, which, when healthy help to fight infections. When you have leukemia, your body makes too many "bad" blood cells that don’t work like they should. Instead of forming tumors, leukemia cells travel in the blood and go all over the body. This means they can reach almost any organ. Leukemia can cause problems and be found in many different ways, depending on which organs are affected. What they all tend to have in common is abnormal blood cells counts with increased immature blood cells in circulation.

What are normal blood cells?

Blood is made up of liquid, called plasma, and 3 main kinds of cells. Each kind of cell has a special task:

Blood cells are made in the soft center of the bones called the bone marrow. In adults, active bone marrow is found mostly in the hip bones, ribs, spine, and skull. Normal cells in the bone marrow develop from very immature cells into mature, working cells ready to go out in the blood. Early, less mature, nonworking forms of new blood cells are called blasts. 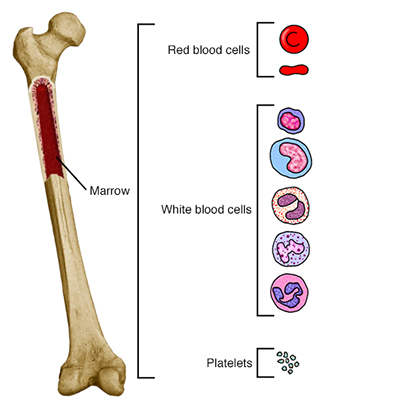 What are leukemia cells?

When a person has leukemia, the body makes too many nonworking blood cells of one type. These abnormal cells, most often white blood cells, don't mature and look different from normal blood cells. They don't work as they should. They also crowd the bone marrow so it can't make other blood cells, often red blood cells and platelets. This leads to low red cell count (anemia), increased bleeding (low platelets) and increased infections (abnormal white blood cells).

Leukemias are also grouped based on how fast they grow:

In acute leukemia, the abnormal blood cells are often young cells (immature blasts) that don't work the way they should. These cells grow quickly. Acute leukemia often needs to be treated right away.

These categories result in 4 combinations, which make up the main types of leukemia: